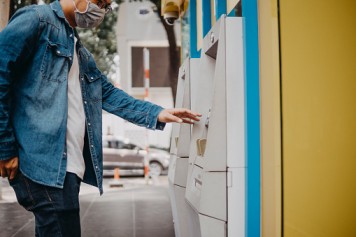 Did you know that the world is home to at least 19 crypto-currency billionaires? Of these wealthy people, at least 16 are US passport holders. Also, Most have built their wealth through Bitcoin (Bitcoin ATM) investments.

So it is no wonder about 46 million Americans now own a share of Bitcoin. But, they don’t only utilize it as a high-risk, high-yield investment means. Also, many exploit BTC as a payment method or send it as an alternative currency to family or friends.

Bitcoin’s increasing adoption has even spurred the growth of the Bitcoin ATM industry. Thanks to these types of machines, crypto users now have more ways to buy, sell, and send cryptocurrency.

However what exactly is a Bitcoin ATM? How does Bitcoin ATM work, and what do you need when using it for your cryptocurrency transactions?

In this article, We’ll answer all those questions and more in the guide below, so keep it reading.

What is a Bitcoin ATM?

Bitcoin ATMs are internet-connected electronic kiosks that are similar to traditional ATMs. The main difference is that the former is specific to Bitcoin trading. Some Bitcoin ATMs also support other cryptocurrencies such as Ethereum (EHT) and Tether (USDT).

How does a Bitcoin ATM work?

Unlike traditional ATMs that require the user to have a bank account, Bitcoin ATMs do not require it. Instead, Bitcoin ATMs connect to the blockchain network where the user’s crypto resides.

Blockchain is a distributed database within a computer network. Store data in digital form to protect bitcoin and other cryptocurrency transactions.

To connect to the blockchain, a Bitcoin ATM must first verify the user’s identity. This is often a multi-step process. The first requires the user to enter their phone number into the kiosk. The ATM will then send a one-time PIN (OTP) to that number. The user must enter this number into the machine to continue.

Some Bitcoin ATMs also require a photo ID to be scanned to verify your identity. This is a valid government-issued ID. B. Driver’s License or Passport.

Bitcoin ATMs must also verify the user’s cryptocurrency blockchain address. This step ensures that the ATM is accessing the correct cryptographic account. Users often complete this step by scanning their QR (Quick Response) code from their crypto wallet.

After completing these steps, the user can proceed with Bitcoin transactions.

What Are Crypto Wallets for Bitcoin ATMs?

Cryptocurrency wallets store public and private keys associated with crypto accounts. A crypto wallet can be thought of as a mailbox. The public key is like the mailbox address and the private key is the key to unlock the mailbox.

As mentioned earlier, to use a Bitcoin ATM, you need to verify the blockchain address of your cryptocurrency. This is your public key, usually generated as a QR code. Scanning this code at an ATM allows the machine to identify your unique address.

Crypto Wallet is available as a mobile app, hardware wallet, and paper wallet.

Mobile apps are most convenient to use at Bitcoin ATMs as they allow you to generate QR codes on the go. Hardware wallets are often USB devices, some with built-in screens that allow you to create a QR code for. A paper wallet is a piece of paper with a QR code printed on it.

Consider using a mobile wallet app if you frequently transact at Bitcoin ATMs. This allows you to create public and private keys anytime, anywhere. Then simply scan the QR code from your mobile phone directly to the ATM.

Many mobile crypto wallets also support various cryptocurrencies and altcoins. Therefore, apart from BTC, they can also be used to manage ETH, USDT, and DOGE (Dogecoin). It is a wallet that allows various transactions at ATMs that support multiple virtual currencies.

What Transactions Do Bitcoin ATMs Allow?

One-Way Bitcoin ATMs only support one-way cryptocurrency transactions. With this type of ATM, you can only buy or sell BTC, not both. However, most of these machines are for buying crypto.

By contrast, two-way Bitcoin ATMs support two-way transactions. They grant the buying and selling of BTC and other cryptocurrencies.

Where Can You Find Bitcoin ATMs?

Use our online Bitcoin ATM locator to narrow your search. Use your smartphone or computer’s GPS to search for nearby ATMs. If you have enabled location services on your device, you should get accurate results.

Some online Bitcoin ATM locators offer more accurate results in certain locations. Just enter all your address details and we’ll use that information to find an ATM near you.

How to Deposit Bitcoin in ATMs?

To deposit bitcoin at an ATM, you must first go through a verification process. You can then use the QR code you prepared to scan the blockchain address into your machine. If you use an ATM that supports other cryptos, be sure to use a QR code for your BTC account.

After confirmation, select a trading option to buy BTC. Then put the cash in the cash compartment of the ATM. The machine should count your money and display the amount on the screen.

If you agree with the exchange rate, you can usually confirm the transaction with an ‘OK’ or ‘YES’ button. The machine will move on and even issue a printed receipt. However, it may take a few minutes to an hour for your Bitcoin deposit to appear in your cryptocurrency wallet.

Can You Use Debit or Credit Cards?

Yes, you can buy BTC and other cryptocurrencies with your debit or credit card at some Bitcoin ATMs. However, not all debit and credit card issuers permit such transactions. People who frequently charge withdrawal or cash advance fees.

All of these additional charges are on top of ATM brokerage and transaction fees.

Can You Withdraw Cash From Bitcoin ATMs?

Yes, when you withdraw bitcoin from an ATM, part of your BTC holdings will be converted into cash. In this case, we are selling BTC in fiat currency. Similarly, you can convert other cryptocurrencies into cash through ATMs.

Try to use an ATM that supports both buying and selling.

How to Withdraw Cash From Bitcoin ATMs?

Assumes you have already completed the ATM identification procedure. Then select the option to sell bitcoin and the amount to sell.

ATM displays a QR code. This code is the ATM’s public key and contains the device’s blockchain address.

Scan this QR code into your mobile wallet so that digital currency can be sent to the correct address. You can then access the crypto and use your private key to confirm that you will sell some of it for cash.

Once the transaction is confirmed, cash will be dispensed from the ATM. You may have to wait a few minutes for the machine to dispense the money.

Can Bitcoin ATMs Send BTC to Others?

Yes, you can use Bitcoin ATMs to send BTC to friends and family who use this cryptocurrency. It’s like selling bitcoin for cash, but transferring BTC to someone else’s wallet instead of an ATM.

The ATM needs the recipient’s public key to ensure that the money is sent to the correct address. This can be obtained by asking the recipient to send the QR code of the wallet. Then scan this code into ATM when asked for the recipient’s address.

Is a Bitcoin ATM Safe and Legal?

Yes, Bitcoin ATMs in the US are legal, as their operators must abide by the federal Bank Secrecy Act. Compliance involves registering the machines with the Treasury Department’s Financial Crimes Enforcement Network (FCEN).

Also, Bitcoin ATMs are safe since they require identity verification. These include the mandatory OTP and QR codes and the scanning of photo IDs.

However, the safety of Bitcoin ATMs (BTC ATMs) still depends on your due diligence. So, we know that criminals are now using them to trick people into sending crypto to their wallets. Please send only to Always check to see if your friends and family are claiming virtual currency.

For example, let’s say you receive a text girlfriend’s message claiming that it is a friend who is asking you to send a cipher to the QR code. Make a video call to that friend first to make sure you sent the message and the phone is not in someone else’s hands.

You should also avoid buying or selling bitcoin to people you have never met. Otherwise, you may unknowingly become part of a money laundering scheme. There is also the risk of sending BTC to someone who never pays it.

Traditional online exchanges can take days or weeks to confirm a cryptocurrency transaction. In contrast, Bitcoin ATMs complete transactions in minutes to an hour. This will allow the ATM to buy and sell BTC and other types of crypto faster and more conveniently.

Also, remember that BTC is so volatile that in May 2021 its value shrank by 30% in one day. Bitcoin ATMs can protect users from this volatility by completing transactions instantly. However, trading online carries the risk of significant fluctuations in value before closing.

Some Bitcoin ATMs also offer the ability to pre-book and reserve the cash that users wish to withdraw. This can usually be done using the ATM’s dedicated mobile wallet app.

Bitcoin ATM cash transactions are also more private than online exchanges. When depositing or selling BTC or another crypto via ATMs, you do not need to provide your banking details. In contrast, it is a must if you do business with an online exchange.

Are There Downsides to Using Bitcoin ATMs?

Some Bitcoin ATMs charge only 4%, while others reach 20%. A typical average range is 9% to 12%. Conversely, online exchanges often charge only 1% to 3% fees.

These charges are added to the transaction and cannot be deducted. For example, if you buy $100 worth of BTC with cash and the transaction fee is 10%, you will have to pay $110. To proceed with the transaction, you need to put $110 into the ATM cash drawer.

Most of these charges go toward ATM hardware and software maintenance. The rest is used for expenses such as cash handling and foreign exchange rates.

Most Bitcoin ATMs also have low transaction limits to prevent money laundering. For example, in most cases, only the buying and selling of cryptocurrencies between $100 and $10,000 worth is permitted. Many machines also require an additional validation process when the number of transactions is high.

Can You Reduce Bitcoin ATM Fees?

Yes, check in advance how much a Bitcoin ATM will charge per transaction. Most reputable ATM operators publish their fees on their websites.

Find an ATM near you and check the lowest rates on the operator’s website. ATM fees can fluctuate depending on the value of BTC, so do this every time you use a Bitcoin ATM. For example, the machine can be charged at 10% today, but 12.5 days later.

Another option is to look for discount codes offered by ATM operators. Some even offer these money-saving deals for first-time sign-ups. These codes offer discounted ATM transaction fees when you first use the machine.

We also recommend not relying too much on Bitcoin ATMs. Instead, use them interchangeably with online exchanges. If you are in a hurry, you can use the former, and if you can wait, you can use the latter. So you don’t have to pay high machine fees all the time.

Find Bitcoin ATMs Near You Today

bearing in mind the massive growth in Bitcoin ATM use, it looks like these machines are here to abide. After all, they are a much faster, more convenient way to buy, sell and send BTC and other types of cryptocurrency.

If you don’t mind paying higher fees or the necessity to make a transaction as soon as possible, it’s time to look for Bitcoin ATMs near you.