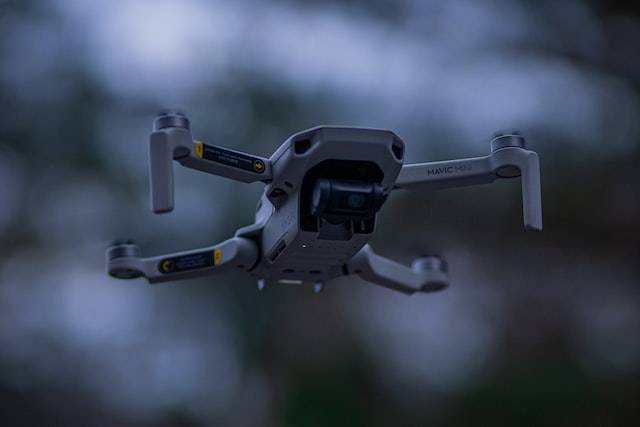 As the world moves to an electric future, is there a place for the gas powered drone?

As most of today’s drones are powered by lithium-ion (Li-Po) batteries, the technology has a few limitations.

What is Gas Powered Drone?

The gas-powered drone is equipped with an internal combustion engine and a fuel tank to power the drone. Some of these drones simply use engines to generate electricity. In contrast, some send current directly to the motor.

With the expansion of drone applications, the demand for drones with long flight times is increasing. Fixed-wing drones can offer longer flight times, but they are not always suitable for all use cases.

Gas-powered RC drones are usually more powerful and efficient than battery-powered drones with the same capabilities. Most of these drones use regular unleaded fuel.

Before companies made drones mainstream, battery-powered planes were considered a niche. For example, model planes flying over AMA fields are typically powered by gas.

The Li-Po-powered drone features no complicated mechanical parts and quiet operation. However, it is less efficient than a gas quadcopter and has significantly less uptime.

Gas powered drones are starting to gain momentum, but the technology is still not as common as electric drones.

Several companies such as Walmart, Amazon, and Google are working to make screwless delivery an everyday service. Drone delivery has made remarkable progress, but it has not yet evolved into a common event.

Regulatory setbacks aside, the power supplies used in many delivery drones are far too limited. Range fluctuates with changing weather, and payload characteristics such as weight and overall size limit the drone’s capabilities.

The gas powered drone has a much longer flight time than the traditional electric system used in many drones. The compact yet powerful engine is efficient and can be refueled quickly without waiting for a charge.

Due to their weight, gas-powered drone airframes are typically large and heavy. The structural integrity provided by the larger footprint allows for larger payloads and better flight stability.

Whether delivering products, food, or medical supplies, drone delivery services could benefit from the adoption of gas-powered drones.

No two emergencies are the same. In short, flight conditions are not always ideal for traditional battery-powered drones. Gas-powered drone helicopters can remain airborne for hours in search and rescue situations.

Manned helicopters are an integral part of emergency response, but as drones become more reliable, there is a dramatic shift in the use of unmanned aerial vehicles (UAVs).

The increased range and efficiency of the internal combustion engine make it ideal for flying complex missions in constantly changing conditions. Li-Po batteries degrade when exposed to strong winds and large temperature changes.

Gas-powered drones work as long as they have fuel, so they are largely unaffected by environmental conditions. Gas can be easily transported even in rural areas where power sources are not always available.

The unique perspective that drones capture makes them an indispensable tool when monitoring large-scale assets. Even in residential areas, homeowners are incorporating advanced drones into their home security systems.

Many drones flying security missions are hampered by lackluster flight times. The situation is even worse when drones operate over large areas.

Gas-powered drones excel in long-running missions and can be easily refueled and returned to service with minimal downtime.

The film industry was one of the first to adopt drone technology various years ago. Lower operating costs compared to manned helicopters are a major advantage.

But Hollywood-sized cameras and hours of filming can be very taxing on Li-Po-powered drones. Instead of traveling with batteries and charging stations, gas-powered drones can be refueled and ready to go.

As mentioned, the large airframe design of these drones means they can carry larger cameras without sacrificing flight performance.

The weight and wingspan of the gas-powered drone makes it more stable in the high winds that are essential for filming.

Gas-powered drones are evolving and more applications will become available. This development will further confirm the demand for energy sources other than electricity.

The main advantages of using gas-powered drones are:

The main drawbacks of using gas-powered drones are:

Another drawback worth noting is the inability of gas-powered drones to fly for indoor applications. Also, Drones are used in warehouses, nuclear power plants, mines, and more.

Smoke from drones in enclosed spaces is dangerous and impractical for the specific use cases mentioned. In addition, if you’re looking for a mining and inspection drone, the Elios 2 or Elios 3 are the best indoor choices.

The Best Gas-Powered Drones on the Market

Gas-powered drones are currently hard to come by as the technology is still developing.

Several prototypes do not make it into the final product due to the above shortcomings.

The Nitro Stingray is a sleek and powerful petrol-powered drone powered by a 2-stroke Scorpion engine. It features variable tilt so pilots can easily control the drone and make quick adjustments.

Maneuverable and stable construction is ideal for aerial photography. The powerful 2-stroke engine can perform various stunt maneuvers. A dedicated controller gives the pilot full control of the aircraft.

Gas Drones That Haven’t Moved Beyond the Prototype Stage

The Goliath Quadcopter is, as the name suggests, a giant drone, a DIY project developed for the Hackaday Prize competition.

Powerful 30-hp lawn mower engine on a lightweight hybrid frame. Drones are relatively easy to assemble as they consist of a variety of commercially available parts.

The Incredible Heavy Lift Quadcopter or HLQ started as a Kickstarter campaign led by a group of students. It is equipped with a dual 2-stroke engine system with a total of 25 horsepower.

Open-source flight control software using, The Ardupilot system is customizable, increasing the flexibility of this platform.

Yeair Hybrid Quadcopter is a unique hybrid quadcopter that breaks the standard of traditional drones with 1 hour flight time and 100 km/h speed.

Gas-powered drones are generally not as responsive as electric-powered engines. The Yeair, however, features a twin-engine design that combines gas and electricity.

Each rotor is driven by a 10cc 2-stroke engine and a 600 watt electric motor. A petrol engine provides power, while an electric motor supports quick maneuverability.

Yeair claims the drone can carry a payload of up to 12 pounds and is not limited to delivery applications.

Other Types of Novel Power for Drones

Li-Po powered drones dominate the market and this trend is expected to continue. But this does not mean that alternative energy sources are out of reach.

Another area of ​​interest is hydrogen-powered drones. Many advantages point to further development of this technology.

What is a Hydrogen Powered Drone?

The Hydrogen drones use hydrogen fuel cells as their energy source. Also, Hydrogen must be free of other elements and stored under high pressure to be a viable energy source.

Hydrogen is converted by mixing with oxygen in the fuel cell and removing the by-product with water. This process offers better energy density compared to battery drones. This allows hydrogen drones to remain in the air for hours.

The drawback of this technology is that the fuel conversion process generates extreme heat that can damage critical aircraft components.

Research and development into alternative fuel sources are still in their infancy, but the future looks bright.